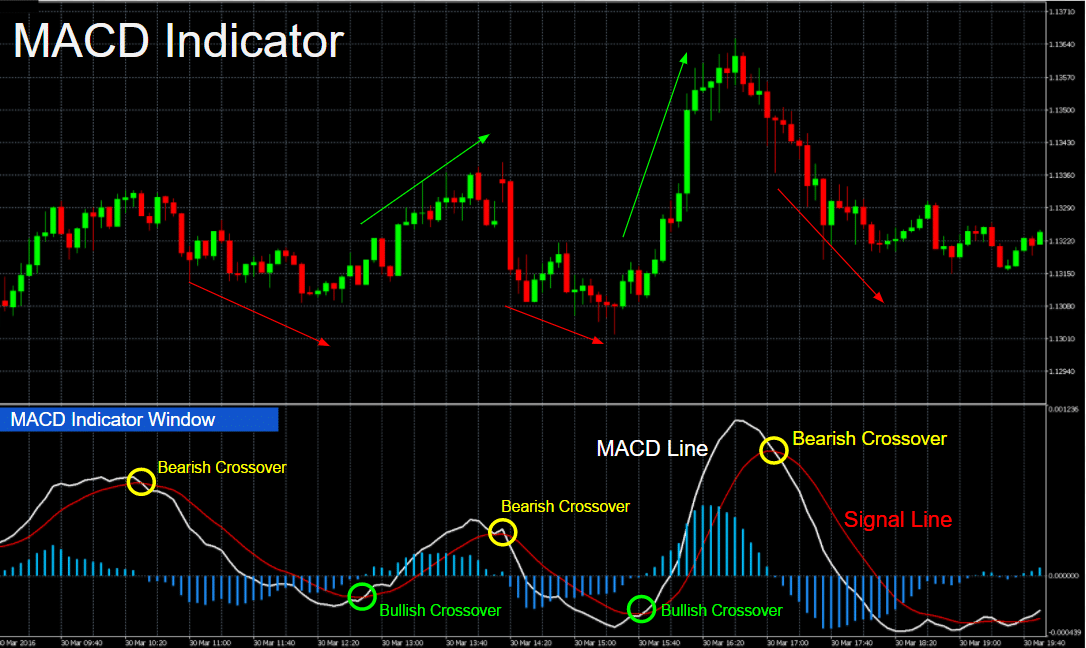 The MACD (Moving Average Convergence / Divergence) is an indicator used in technical analysis to give estimate and predict fluctuations of the asset prices.

The indicator was first described by Gerald Appel in his book “Systems and Forecasts” in 1979. Thomas Esprey added a histogram to the MACD in 1986.

What is the ‘Moving Average Convergence Divergence – MACD’
The Moving Average Convergence Divergence (MACD) is a trend-following momentum indicator that shows the relationship between two moving averages of a security’s price. The MACD is calculated by subtracting the 26-period Exponential Moving Average (EMA) from the 12-period EMA. The result of that calculation is the MACD line. A nine-day EMA of the MACD, called the “signal line”, is then plotted on top of the MACD line which can function as a trigger for buy and sell signals. Traders may buy the security when the MACD crosses above its signal line and sell, or short, the security when the MACD crosses below the signal line.

Being both a trend following indicator and an oscillator, MACD gives the types of signals to entry the market, which are logically quite different.

The basic signals of the MACD indicator:

It is the most common and frequently used signal. The signal appears when the MACD line crosses the signal line. Of course, the type of signal depends on the manner of the intersection:

The MACD histogram will display a zero value, as it shows the difference between the MACD line and the signal line of the indicator.

There are two types of signals that we receive from the MACD line at the moment when it crosses the zero line of the indicator:

Such signals are typical for all oscillators, including the MACD. As a rule, the occurence of a divergence indicates the completion of the movement (the weakening of the the trend) and a possible strong correction or a reversal. And, as for most other signals, there is a working rule that one should remember: the larger the timeframe of the price chart, the stronger the signal.

It is not necessary to have two local maxima / minima to form a divergence. There may be three or more. This means that the precise point of reversal can not be determined this way.

The trend does not necessarily reverses. It can simply get flat. Thus, a divergence or a convergence only indicates the slowing of the trend’s strength.

A divergence or a convergence can confirm some technical analysis patterns, like a double top or head and shoulders.

How Does Olymp Trade Work?

How to Withdraw Money From Olymp Trade

Find out If Olymp Trade is Legal in India