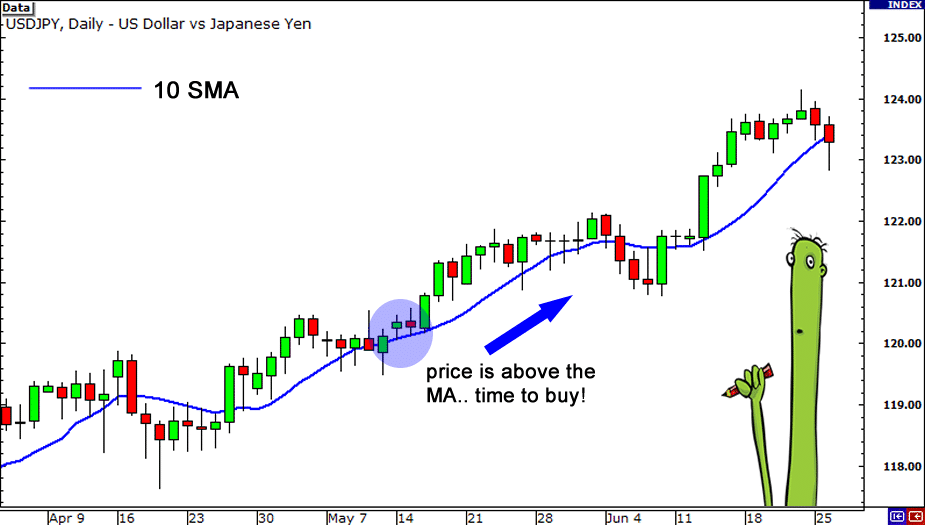 Moving Average (MA) is a trend indicator in technical analysis, that many strategies are based on. It is a line on the chart, which shows the average value of an asset over a period of time.

The time period is the key variable of the moving average. It determines the number of values ​​that are used for calculation.

The type of moving average and the number of periods that are used for smoothing (they are called the construction period, a window or moving length) are chosen by traders at their discretion and depend on the trading strategy.

Introduction
Moving averages smooth the price data to form a trend following indicator. They do not predict price direction, but rather define the current direction with a lag. Moving averages lag because they are based on past prices. Despite this lag, moving averages help smooth price action and filter out the noise. They also form the building blocks for many other technical indicators and overlays, such as Bollinger Bands, MACD and the McClellan Oscillator. The two most popular types of moving averages are the Simple Moving Average (SMA) and the Exponential Moving Average (EMA). These moving averages can be used to identify the direction of the trend or define potential support and resistance levels.

There are a lot of varieties of MA. We will focus on two of them, which are most widely used on Olymp Trade platform:

All moving averages in the picture are 10-period ones (the period is set by default).

The SMA and the EMA differ from each other in terms of the calculation (formula) of averaging the price. Therefore, different moving averages look different on the same period.

1. To define the direction of the trend. If the moving average is rising, it makes sense to buy, if it is falling, it’s better to sell. In this case, the entry and exit points in the market are determined with the help of other strategies, for example, “Sliding averages” (based on a faster moving one).

4. Depending on whether the moving averages in the period point upwards or downwards, traders determine the up- and downtrends: short-term (up to 50), medium-term (from 50 to 100) and long-term (100 and more).

5. The moments of the largest discrepancy between two averages with different parameters (fast and slow) give us a signal of a possible trend reversal.

When people use the moving average method to trade with the trend, there’s always a certain lag at the entry point, and, accordingly, a considerable part of the trend movement may be lost.

Using moving averages when the market is flat gives a lot of false signals and leads to losses.